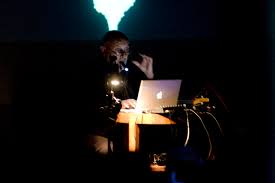 Marek Chołoniewski (b. 1953 in Kraków) is a composer, sound artist, performer, and teacher.
Chołoniewski studied the organ under Leszek Werner, music theory and composition under Bogusław Schaeffer, and electric music under Józef Patkowski at the Academy of Music in Kraków. Since 2000, he has been the director of the Electroacoustic Music Studio at the same academy, where he had also worked since 1976 as an associate professor of the Department of Composition.
Chołoniewski is the founder or co-founder of many groups and societies, such as Pociąg Towarowy (Freight Train), Studio MCH, Studio Ch & K (with Krzysztof Knittel), CH & K & K group (with Knittel and Włodzimierz Kiniorski), mc2 duo (with Marcel Chyrzyński), Double Mark (with Marek Polishook), Infinity Quartet (with Keir Neuringer, Ryan Zawel, Rafał Mazur), Natural Plastic (with Amy Knoles), and Kinetic Trio (with Kiniorski and Mazur) – all of which give live concerts and record albums. In 1977, he founded the Muzyka Centrum Art Society, which had organized 746 concerts presenting approximately 560 Polish and world premiers up until 2013. Chołoniewski has also been a member of Grupa Krakowska since 1979.
Marek Chołoniewski writes instrumental and electroacoustic music for radio, television and film. He is the author of sound and video installations, and audiovisual, outdoor and network projects. Since 1984, he has given concerts, workshops and lectures in Europe, the Americas, and in Asia.

In 2006, Marek Chołoniewski received the Honorary Award of the Association of Polish Composers, the Ministry of Culture and National Heritage Award, and the Independent Project Grant from the CECArtsLink Foundation, based in New York. From 2008, he served as secretary, and since 2011 as president, of the International Confederation of Electroacoustic Music (CIME / ICEM).
Marek Chołoniewski is an ever-exploring artist. It wasn’t for nothing that he studied composition with the Polish guru of new music, Bogusław Schaeffer, and it wasn’t by chance that Krzysztof Knittel is one of his closest friends out of many other artists. With the latter, Chołoniewski collaborated on many projects dealing with all sorts of music, including the spectacular Pociąg Towarowy (Freight Train) – a kind of recurrent and constantly transforming artistic performance. This area of contemporary music seems to be highly valued by Chołoniewski just as much as audio-visual compositions and electroacoustic music, which he has been creating from 1976 at the Electroacoustic Music Studio of the Academy of Music in Kraków.